The Artist and How Time can Escape

Each morning I wake up to my 2 dogs gathering by the bedside ready to eat breakfast and go out and see what has changed overnight on the back property.  They patiently wait for me to wash my face, pull on my clothes, open the blinds, and just bumble around as I awake.  When they are fed, I let them out the door and have a peak at my E-Mail to check into the world.  I dare not stay too long on the computer because I know Ziggy is waiting in his lower pen staring at my front door.  I FEEL that horse stare at the back of the house at my computer.  Out I go with 2 gallons of warm water to de-ice the water containers.  Ziggy is fed his supplements first in the lower pen. I sneak behind the studio building (which is out of sight of the upper pen) with  his bucket of special feed that I hang on the fence so the goats do not "invade"his food.  All 4 goats are waiting for me by the gate as I enter the corral in the upper pen to move the large metal feeder into place and change out a bucket of water.  I dump hay through the opening in the hay barn to the feeder and hit Abbakiss on target everyday as he stands in the middle of the feeder.  This is his new game, to "receive" the hay before everyone else.  I then feed Abbs and Cloud in their yurt because when Ziggy comes up from eating his supplements, it will be too crowded at the large feed bin  and goats could go flying as Zigs uses his powerful head to move them around.  Once everyone is fed, I let the dogs into the corral area and muck up manure.  I actually like this task very much (except on cold, windy, snowy days) because it is quiet and peaceful on the land and my mind goes into non-stressful think mode.  Sometimes I sing because no one can hear but the animals and that's OK with them.  Next is breakfast and the start of my day in the studio or on the computer.

I have been itching to work in my studio for the last week, but somehow the time and days have gotten away from me.  I also feel I have been in think and look mode which compels me to peruse various sites on the internet as I "prowl" for interesting work that is stimulating to my process.  This activity is usually a prelude to intensive work time.  Today I have also decided to apply for a exhibition I thought I would skip, but a second notification in my E-Mail "pricked" my interest enough to apply.  Deciding to apply to shows is determined by venue, curator, cost, and the number of images one can submit.  I am very particular about applying and often feel I need to have the new ideas percolating in my head completed before I fill out an application.  Of course if I followed through on that thought I would never apply to any show because there are always ideas and images popping up as I go about my life.  I spent an inordinate amount of time this morning re-sizing and preparing 8 images with labels and explanations on an on-line site.  When I looked up it was almost mid-afternoon and I was starving.  The dogs were also starving  and as I was feeding them they got into one of their fights that I had to referee.  That incident  took up  more time.  No blood, thank goodness.  As lunch was cooking I began this blog and after lunch I wanted to complete my writing.  So here I am  as the day has moved along at its own pace finishing up my writing and knowing I must go out to the corral to feed the "boys".  All in all a very good day with much done but not in the studio yet.  The anticipation is growing and I look forward to tomorrow knowing I have my writing finished for the week.

Posted by Diane G Rolnick, Artist at 4:50 PM No comments:

Art Web Site:   TEXT
Just came in from the corral from feeding Ziggy and the goats - Finian, Rainbow, Abbakiss, and Cloud.  All are Nubians but Cloud who is a Nigerian and came to stay for awhile as young Abbakiss's "babysitter".  Cloud comes from a special herd of Nigerians owned by my friends, Deb and Chuck, down the road.  The Nubbies are a large breed of goats and my gelded boys serve as Ziggy's herd.  13 years ago when Ziggy came to live with me when he was 2 (and that is a story for another day),  I had to decide what companion animal I wanted to live with him.  I chose the Nubians because of their size but I had no idea what incredible creatures they were.  They are smart, funny, in awe of the world, and love to play.  Having a bad day?  Just go and pet a goat.  Abbakiss, at 7 months old, is my youngest and his story is rather magical.
Last summer my older goat, Chocko became ill and in a few days was not able to walk or breathe.  I was devastated and had my wonderful goat vet, Dr. Heidi Hamlin, come out and check him out.  There was nothing she could do since Chocko's aliment came on so quickly.  I made him as comfortable as possible and isolated him from the others so he could rest.  The day before Dr. Hamlin came out to give Chocks a peaceful passing I began to have an image of a little baby goat in my head.  I
was confused because all I could think about
was seeing to Chocko's comfort and burial
arrangements.  A few days after Chocko's
passing I was drawn to the Southwest Dairy Association site on my computer.  A name popped out at me, Pat Jones.  I called her and found to my surprise that one of her goats had a unexpected male baby late in the season and he was just a month old and she did not know
what to do with him.  Most goat farmers keep
the females for milking and may have a few
bucks and geldings around, but do not need
more male goats.  Sometimes those little guys
go to other farms and often to the butcher.  So I ran out to her farm in Belen, New Mexico to see the little fellow.  He was brown and white and Pat called him Cocoa Puff.  He was adorable and tiny and so alert.  I knew he was mine.  A month later, my friend Deb and I drove back down to Pat's farm and "packed-up" the little guy and put him in my access cab behind my seat.  Deb was there for goat duty and support.  The little fellow let out a few "baas" and then sat down and enjoyed the trip.
Deb and I were amazed.  I could feel him listening to our voices as we spoke.  The unusual aspect of this homecoming was I had always taken home 2 goats so they had each other for company.  I had planned to put my fellow by himself in my goat pen and hope he would acclimate. Wishful thinking!
Nubians are known to have the loudest voices of all the goats and that first night I was very aware just how loud a 2 month old could BAA.  I received a number of calls from neighbors who were worried I might have a "problem" with one of my goats.  I quickly called Deb the next day and we arranged to have Cloud, one of her Nigerian geldings come and "babysit".  Cloud is a very independent little guy  who was the smallest in his herd of Nigerians.  He walked into the "new guy's" pen and became acquainted.  The 2 of them were such an odd pair and still are to this day.  There was no crying that night as Cloud and his new charge kept each other company.  As the days went by, I was amazed how confident and smart this new baby appeared.  Cocoa Puff was definitely too lightweight a name for such a creature.  I went on-line and looked up names for horses and found the name Abacus, the name of the ancient counting device.  That had enough gravitas for this "full of himself" fellow.  I spelled it Abbakiss because my guy  has always given many kisses.  Abbakiss has been an unexpected gift to me and the barnyard.  He has insinuated himself into everyone's business and is the first at the gate when I approach the corral.  He and my dog Rooe give each other kisses and my yearlings Finian and Rainbow move him around gently.  He brings a smile to all who visit.

Posted by Diane G Rolnick, Artist at 4:48 PM No comments: 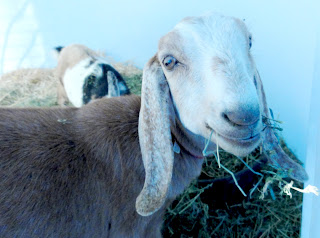 Wonder comes in many forms. Looking back during my 16 years here in New Mexico I am touched by how the culture, land, light and air has allowed me to live in a space of harmony with my art and my animal family.  Abbakiss, my young 7 month old Nubian goat expresses that contentment everyday to me with his smile and antics.  My intention is to write weekly about the animals and the process I work through in my studio to develop ideas and work that is honest and personal.